What is Hypnosis, and How Does it Work? Is Hypnosis Real?

Everyone has heard the term hypnosis used by both laypersons and professionals alike, but they may be wondering just what hypnosis actually is.

It’s no secret that hypnosis is one of the oldest forms of psychotherapy. In fact, it’s been around for more than 3,000 years. But many people are surprised to hear that hypnosis is used today to treat everything from dental care to smoking cessation, sports injuries, and even substance abuse. But just how does it work, and why might it be effective?

Hypnosis is one of modern medicine and psychology’s most misunderstood and misused tools. There is no question that it is effective when used correctly.

What exactly is hypnosis?

Hypnosis, also known as hypnotism, is a state of focused attention and absorption in which a person becomes open to suggestions.  During a hypnosis session, the subject can experience a sensation of deep relaxation and involuntariness. Hypnotizing someone involves guiding them into this relaxed state and then providing them with positive suggestions.

When we talk about hypnosis, we often tend to be either talking about either:

What is the hypnotic state?

People are said to enter a hypnotic state when being hypnotized. The person’s attention is often so focused that they don’t notice what’s happening around them or if they do notice it, they don’t heed it.

People are more willing to listen to suggestions when they are hypnotized. Many of the interesting effects associated with hypnotism tend to result from suggestion; on its own, a hypnotic state may feel relaxed or focused.

Suggestions are a chance to experience the world differently. They can be used to make changes in sensation, perception, thought, emotion, and behavior. It’s possible to deliver suggestions in or out of hypnosis.

Suggestions might include instructions to use your imagination, but whereas using your imagination might feel effortful, a successful response to a suggestion is where the effort feels like it is happening on its own.

What are hypnotic suggestions?

Suggestions that are delivered after someone is hypnotized using a hypnotic induction are called hypnotic suggestions.

It isn’t necessary for someone to be hypnotized to respond to a suggestion, but many people respond better to suggestions after they are hypnotized. Some examples of hypnotic suggestions are:

“When you wake up, you will find it difficult to remember your name, so difficult you won’t even try.” This could produce the effect of amnesia, which is useful to help manage a stressful reoccurring memory of a trauma.

” I want you to imagine and then begin to feel the sensation draining out of your right hand. It is feeling more and more numb.” This could produce analgesia, which is useful for pain management.

“When you open your eyes, you’ll see your best friend sitting in the chair next to you” This could produce the effect of hallucination. This is often used in a stage hypnosis show which is primarily for entertainment.

How does hypnosis work?

Hypnosis is a form of psychotherapy that uses focused attention and guided suggestions to induce a trance-like state.

Hypnosis can be particularly useful for treating conditions such as IBS, anxiety, and depression. It may also be used in conjunction with other forms of psychotherapy or medical treatments.

To use hypnosis effectively, it is important to find an experienced hypnotherapist who can provide personalized care and tailor the session to meet your individual needs. The therapist will then use verbal cues and guided suggestions to help you reach a deep level of relaxation and focus on positive outcomes.

With regular practice, you can learn how to use hypnosis as part of your self-care routine.

In a hypnotherapy session, what is a hypnotic induction?

To help someone become hypnotized, a hypnotic induction is used, a procedure that aids the focus of attention and often but not always contains instructions and suggestions for relaxation. A hypnotic

In the UK, hypnotherapists use hypnosis to hypnotize clients for IBS Symptom relief.

The use of hypnosis has been found to be an effective therapeutic treatment for IBS symptoms such as abdominal pain, bloating, constipation, and diarrhea. It can also help reduce stress levels, which can have a positive effect on overall health.

Hypnotherapy is safe and non-invasive, making it an ideal choice for those looking for natural ways to relieve their IBS symptoms.

Clinical Hypnosis has been used as a psychological treatment for many health conditions, such as anxiety, depression, pain management, and addiction.

It is also used as a form of therapy to help people overcome specific issues or behaviors. In addition, hypnotherapy may be used for relaxation purposes or to improve performance in sports or other activities. It has been found to be effective in helping people quit smoking, lose weight, and even improve their self-confidence. Hypnosis can also help people overcome fears and phobias by allowing them to confront their fears in a safe environment. In conclusion, hypnosis is an effective form of therapy that helps individuals relax and become more open to suggestions while addressing various health conditions.

To Learn More About How You Can Use Hypnosis, Read:
Hypnosis For Self Improvement

Most hypnosis researchers are in agreement about most aspects of hypnosis, hypnosis therapy, clinical and experimental hypnosis. But there are a few things where they don’t agree.

Some scientists argue that true hypnosis is an altered state of consciousness marked by brain activity changes, such as increased blood flow and greater activity in certain areas of the brain or hemisphere.

Whilst others believe that hypnotized people are actively behaving in a hypnotic manner. They aren’t just passively responding to suggestions as the certified hypnotist or hypnotherapist guides them into a deep state of relaxation, concentration, and focused attention.

It is possible that all of the explanations listed above describe different aspects of the overall phenomenon of hypnosis.

Finally, Hypnosis is a state of mind that causes an individual to become highly suggestible and open to suggestion.

A person can get hypnotized by concentrating their attention, memory, and behavior on a single idea.

Hypnosis is developing rapport between hypnotists and clients and using verbal suggestions to cause them to enter a trance-like state.

During hypnosis, the hypnotist will use body language and non-verbal cues to facilitate the hypnotist’s ability to guide the client to a hypnotic trance.

The power of suggestion has been known to affect behavior and mood for centuries, but hypnosis is one of the most powerful forms of suggestion. Learn how hypnosis works by watching these two videos.

Video One: What Is Hypnosis? 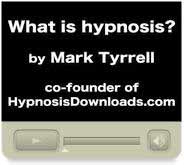 Learn about hypnosis on video

Okay, we’re really talking about it in the instincts.

Now, if hypnosis has been successful, if you’ve used self-hypnosis, for example, to get yourself feeling more confident in social situations for example, or if you’ve had hypnosis as a form of therapy in order to overcome a phobia to stop smoking, or to begin to come out of depression, or whatever it might be.

Then really, what’s happened is, on some level, your instincts have changed. You’ve updated your instinctive response to something.

It’s much more satisfactory when people just don’t feel like smoking anymore rather than when they have to try not to smoke, so different.

Or it’s more pleasing if someone just doesn’t have the phobic response to something anymore.

It just doesn’t get wheeled out anymore.

Okay, things are different, so they see a spider, and now they feel relaxed.

They’ve started to run away through habit before realizing that they’re no longer afraid of spiders.

Okay, their instincts have learned something new, even if the conscious mind didn’t yet believe it.

Until further evidence was produced.

Okay, so because human problems for example are based, are maintained, on an instinctive level.

That it makes sense to work on the instinctive level in order to overcome them.

Okay, people who have panic attacks don’t generally consciously decide to have a panic attack, just kind of happens.

Okay, or people who blush, they don’t sort of tend to think, right, okay, now’s a good time to blush.

Color just happens by itself; it gets wheeled out through from the unconscious mind.

Okay, so in order to change that response, then we need to deal with unconscious processes and we do they do this through the REM state or otherwise known as a hypnotic state.

Video Two: How Does It Work?

When you hear the word hypnosis, what do you think about?

Hypnosis is all that, but so much more.

The thing is, you have already been in the deepest possible hypnotic trance…Every time you dream at night when you are in the REM (or Rapid Eye Movement) state.

Hypnosis is simply tapping into the state while you are awake.

The most REM you ever experienced was in the three months before you were born.

That’s because your brain was being programmed with the things you needed to survive.

Things like recognizing a nipple to feed from…knowing to avoid dangerous heights, how to learn a language, and so on.

So, to quickly change and help unconscious learning as an adult lack of self-confidence, anxiety, low self-esteem, and so on.

We can go back into the REM state – and this we call hypnosis.

Using hypnosis – nature’s in-built programming state, We can take deliberate control of our unconscious mind to fix unhelpful patterns and get the very best from ourselves.

Learn hypnosis for free with our 5-day course

Hypnosis For Insecurities In Relationships.

Reach out to us for sponsorship opportunities